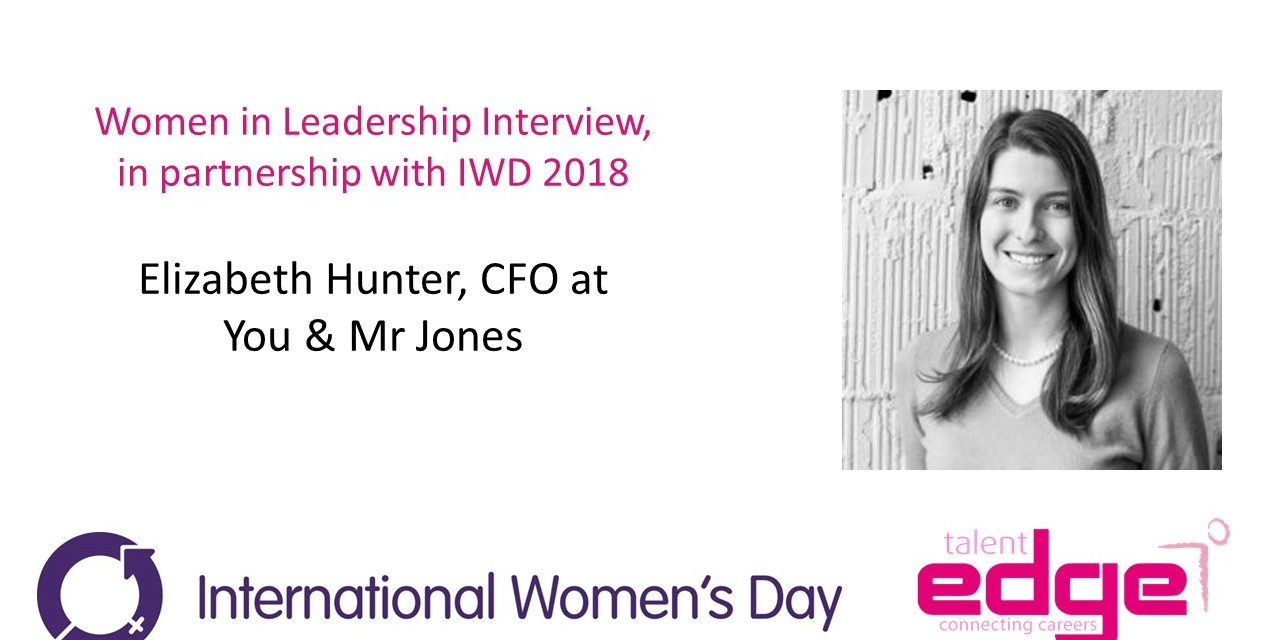 Elizabeth’s advice is to buck the trend and that is certainly what she has done! She is a great example of a modern day family member and she isn’t afraid to be honest. When interviewing at You & Mr Jones she was transparent about hopes to start a family and believed if they wanted a long-term investment, maternity leave would not put them off.

Elizabeth has recently given birth to a lovely little girl and is sharing the parental leave with her husband, meaning she does not fall out of touch with work for a full year and the burden of maintaining the household income doesn’t fall solely on her husband.

Will it take more men to exercise their right to take shared parental leave to make this the new norm?

Women leading in a man’s world?

Is media a well-represented sector in terms of female leadership? Elizabeth’s experience has certainly been so. When in NYC Elizabeth said there were more women in the leadership team than men. These women weren’t ‘alpha females’, demonstrating typical male behaviours to over compensate, “We need men and women in leadership because they bring something different to the table” and this is why she felt it was notable that it wasn’t an alpha room, and so all brought different insights. All diversity is important not just gender; Elizabeth was 10 years younger than most others on the board in NY and this variety is needed to maintain different touchpoints with clients and also to ensure your team represents the demographics of clients/customers.

“There’s no such thing as negative feedback. All feedback is essential for your teams development” and one thing she won’t slack on is her teams appraisals. However, as a generalisation, she does feel that men are better at taking feedback, maybe giving it too. She has found man to man feedback tends to be more direct, taking criticism on the chin, but are men as direct with women?

Let’s face it we spend more time at work than with our family, so Elizabeth tries to make it as fun as possible; she strives to create a hardworking team but one where everyone has fun! I loved hearing about her ‘elevenses’ back in the States. A weekly ritual of tea and scones amidst serious discussions and questions – the best way to have transparent conversations and a great way to connect the team, and who doesn’t love a scone!

It seems like the scones did the job because in her 3.5 years in NY, she only lost 1 person out of her team of 10.

With her CFO cap on, Elizabeth can see that pay review discussions often start with those that make the most noise; not necessarily the top performers. She thinks it is worthwhile asking for a pay rise but also that you “make sure you can show that your performance is improving and your level of responsibility has grown; it’s all relevant to an individual’s performance”. Elizabeth’s advice is “do your research and make it factual – use recruiter benchmarks to gauge your market value and support your rational for why you deserve one”!

Elizabeth hasn’t found a disparity between men and women asking for pay rises but, in her opinion, it’s more down to the individuals’ personality and confidence.

On family and juggling children and work:

In her first week at WPP, Elizabeth was sent to New York at 2 days notice, but is this something a lot of women can do easily? Fortunately, this was before her daughter so it was possible, but it wouldn’t be for everyone and perhaps this limits opportunity for women with family commitments.

Elizabeth also agrees that there are certain pressure points in a finance career (month/quarter end) that restrict the ability to work with more flexibility and this can make it more difficult for working mums to leave on time. Being in a CFO role actually makes this a little easier as she is less hands on at these times. But she can see that 5 years ago when at FC level, this would have been harder to manage.

Elizabeth’s advice is to seek out an industry where you are the minority; not because you will be positively discriminated against, but because you will bring a different way of thinking to the table, enabling you to rocket through the ranks and your career. “Buck the trend!”.

And there is no harm in interviewing. Elizabeth recommends “interviewing once a year; it’s a skill you don’t want to get rusty. And sometimes it’s good to know the grass isn’t actually greener!”

Elizabeth has been inspired working with Emma Cookson, one of the top “30 most powerful women in Advertising”*, so much so that she moved to You & Mr Jones to join forces again.

Emma is an honest and fair leader and refuses to exercise positive female discrimination. Publicis has many groups to encourage and nurture diversity, not limited to gender. And Elizabeth has felt spoilt by having so many inspiring female role models around her. Publicis offers sensational training so she sees this as a great opportunity for employees to get free high-calibre training.