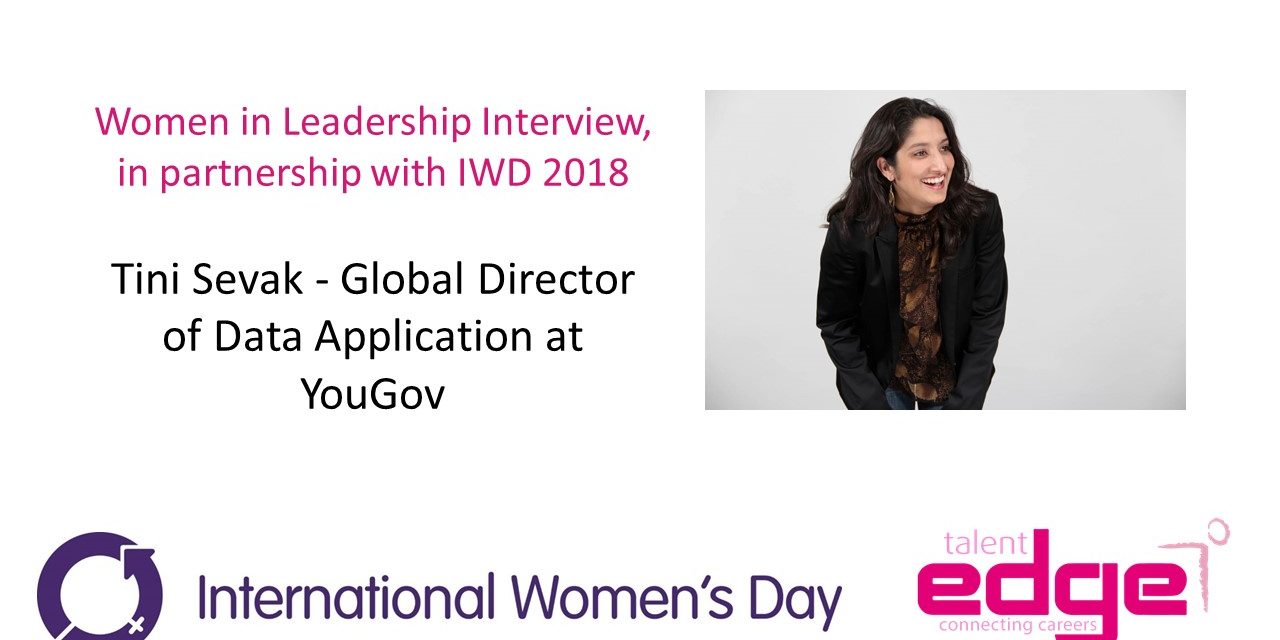 Tini has come a long way geographically, professionally and personally.

Born in the U.S, her career started at Mindshare New York after completing a Masters in Economics. Her experience of leadership began much earlier while studying at Boston University Questrom School of Business which prides itself on producing ‘innovative and ethical leaders who understand the impact of business on society and create value for the world.’

She made the courageous move to London 10 years ago having never been to Europe before. She made the leap across the pond to do something different and unexpected; “taking control of both [her] career and personal life”.

Tini is Global Director of Data Applications at YouGov and is part of a leadership team that is determined to reflect the boldness and innovation of their products and services in their own approach to diversity and inclusion within the business.

Tini has succeeded because she works hard, is prepared to be brave and has taken care to build an inner belief in her abilities which means she is continually developing a strong “inner voice” and clear vision for the type of leader she wants to be.

On how the industry can encourage diversity

Tini is quick to point out that gender diversity “is about empowering women not de-powering men”. As a person who “ticks nearly every box for diversity”, she wants to know her advancements and successes are due to her abilities not because of tokenism or a box ticking exercise. Women should be promoted because senior management have confidence in them as a talent they want to invest in and appreciation of the skills they bring to a role, rather than to meet a quota.

If companies want gender diversity in leadership they need to look at the talent they already have and help women to empower themselves as well as giving them the opportunities to be promoted into leadership roles.

Beyond this there also needs to be a focus on genuinely appreciating diversity rather than assuming that women will take on the traditional “male” traits to succeed. As Tini put it “women shouldn’t have to sacrifice grace and elegance to be a leader”.

Although Tini has witnessed some terrible examples of the “boys club” in action during her career, she has also seen the companies she has worked for step up to the challenge through innovative, well thought through programs – Starcom’s Women in Leadership program is one that stands out for her and helped shape her into the empowered leader she is today.

The good things going on at YouGov

It’s great to hear the passion that Tini and YouGov have for promoting diversity.

“Our workplace is defined by complexity, disruption and change. We have been successful in disrupting the world of traditional research in our thinking, vision and solutions to be pioneers of online research. What makes YouGov an incredible place to work is that as a successful company we are not afraid to bring diverse perspectives and experiences to each new challenge. That is why I am proud to work for a business and with other transformational leaders at YouGov to look at the challenges women often face, and clear the path for talented and dynamic leaders to rise to the top.”

“As women leaders we should be helping in creating a work environment where our top talent can thrive. Initiatives like women@YouGov and BeYou are great as not only do they celebrate diversity, but aim to support, develop, and more importantly retain our top talent.”

Role models and mentors are key to success

What was particularly striking about Tini’s story was her emphasis on those people around her who had inspired and supported her. She could reel off a list of women (as well as men) in the industry that she admires and have been active mentors and influencers during her career.

Finding great mentors comes up again and again when I meet women like Tini. Some they seek out and others they happen to come across. They can be there as guidance, inspiration or to encourage someone to push their own boundaries.

One woman stands out in this story as a defining and early influencer is Tini’s mother. Widowed at a young age she was left with two children to raise and a household to manage alone – so Tini’s first role model was a person that didn’t fit into a traditional male or female role – and had to learn very quickly how to fulfil both roles for her children. Not only did Tini see a strong woman that didn’t conform to a gender defined role but also a woman that worked incredibly hard to learn new skills. “We didn’t have any gender specific chores growing up – both my brother and I were taught the value of cooking, cleaning, mowing the lawn, fixing a leaking sink. My mom raised us to be strong, confident and independent children”. It was at a young age that Tini learned that there were no boundaries to what a person (a woman) can do. “I have learnt that with enough heart, determination and practice anything is achievable.”

Like a number of women we’ve met during this series, Tini is optimistic that skills such as coding become the norm for everyone in early stages of education we will see a natural increase in diversity across data engineering and science.

But it’s clear that this isn’t just about gaining the skills but also the avoidance of barriers between genders from the cradle. Tini suggests the Nordic approach to raising children in less gender defined environments could hold the key to ensuring girls don’t just think “I could do this” but also that “there isn’t any reason not to do it.”

Finding and using your voice – be brave and don’t wait for permission.

At the core of Tini’s development and success has been her ability to express her ideas with confidence and on occasion uninvited. Her advice is that “it’s all about finding your voice and not waiting for permission to use it”.

Tini all too clearly remember situations where she wasn’t allowed or expected to express it herself. In her younger years it was a “fight to get my views heard” and led to ridiculous situations, such as times in pitches when only the Group Director was supposed to speak so she spent her time passing notes to him on what to say!

Be brave and be heard! As one of her mentors once told her – no one at the table is going to fight for you to be heard if you won’t yourself.

Advice to her younger self – be ruthless in who you choose to guide you.

Do not feel you need to listen to everybody – lots of people will have an opinion but focus on the trusted voices within your arena – those that know you day to day and are on your “team”.

Plenty of people will have a point of view but only those close to you will have valid advice.

Be ruthless on whose opinion you take seriously.

She’s is still testing and challenging herself..

A recent example of Tini still challenging herself is the story of her first foray into public speaking. Women are leading adapters of technology, yet when it comes to the data and technology industry, men dominate. Go to any digital, data and technology marketing conference and the panellists, speakers and attendees will be 90% male. She didn’t always have the confidence to speak on stage and is thankful for people like I-COM’s Chairman Andreas Cohen for suggesting she take part as a speaker. She took on this challenge and tapped into that inner confidence to convince herself that her public voice would be valid. “I believe it is time for a shift in perception and a need to encourage and motivate women in our industry to take the stage – literally”.

“We have to be the change we want to see.”