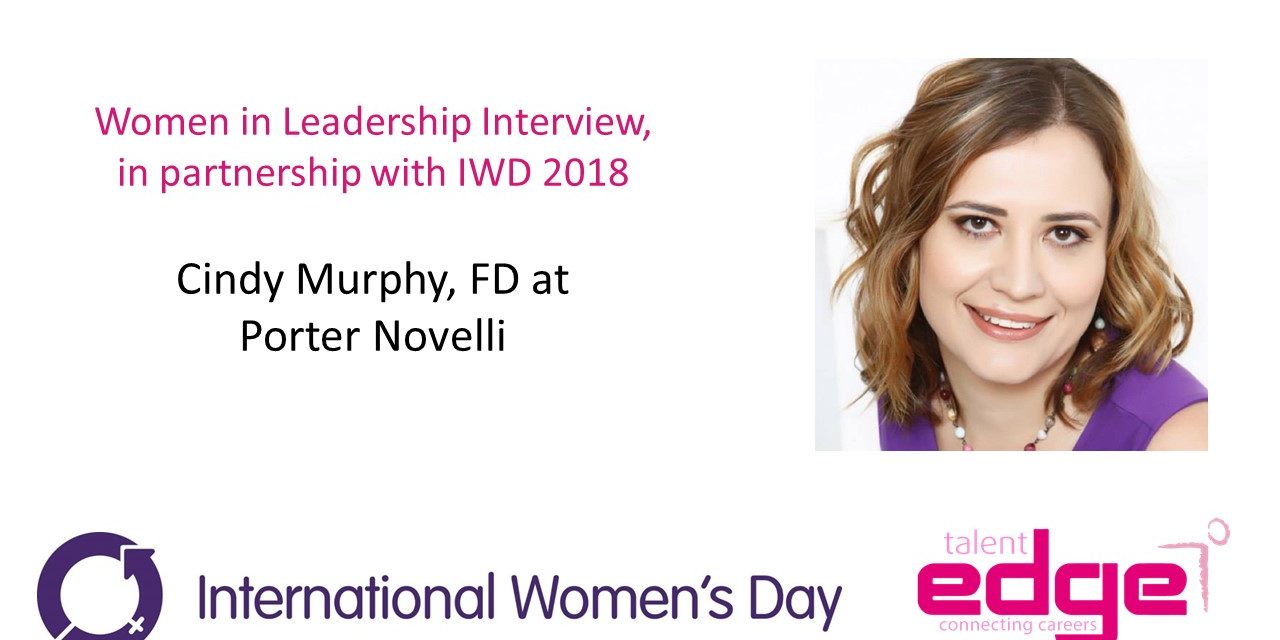 Cindy grew up and was educated in Johannesburg, moving to the UK 10 years ago. She has a finance career spanning 16 years and is now Finance Director for Porter Novelli, part of the Omnicom Group.

Her first role in finance was in South Africa and she feels lucky as her first boss proved to be one of her greatest mentors. She worked with him for four years, before moving internally and then deciding to move to the UK.

She arrived in London 10 years ago and her first role was with Ogilvy, where she spent the next 9 years. Cindy held three roles with Ogilvy during her tenure, typically moving internally every few years, and progressed from Staff Cost Accountant to Financial Controller in that time.

She thinks it is important to be honest about your career objectives and talk to your senior management team about what you are looking for in your career. Each time she was ready for the next step, she would talk openly about what she wanted to achieve. “It’s important to be realistic, set expectations and give people a chance to make it happen”. When she was looking for her first FC role, it took almost 12 months for the right opportunity to come up. But it did happen.

In 2016/17, Cindy was ready to make the next big step in her career, looking for her first FD role and so again, she had frank and open conversation with the management team. The move didn’t happen internally this time, but there was no surprise when she resigned for the promotion she had secured externally.

On role models and mentors:

Cindy thinks it’s important to seek out mentors and to ask for help when you need it. “There is no weakness in asking for help…you will get issues resolved more quickly than trying to figure it all out for yourself”. And this was certainly the path she took when she need help in those early months in her first FC role.

On leadership and mentoring:

She feels that leadership is about “treating others as I would want to be treated” and understanding that “I am only as good as my team”. Cindy waits to conduct her team appraisals until she has had her own; “where there is success, it should be shared with all those who have contributed”. She likes to see the potential in people and then put the structure in place to enable that potential to be fulfilled.

Does she mentor others? Less so technically as she feels lucky to have had very competent teams. But yes, in an informal, more personal capacity, supporting her teams emotionally and from a business point of view.

Have you ever asked for a pay rise?

Generally, Cindy has found that pay increases have come with changes in role and responsibilities, but, yes, she has asked. “It’s important that you know your worth and value to the business”.

Cindy believes that her own progression to date and that of others should always be based on merit, and not because she is a woman. “I’d hate to think I’d got anywhere because I’d fulfilled a quota, it should be because of my achievements and ability”.

So what advice does Cindy have for you?

2017/18 has been Cindy’s first year in a FD role and it has been the year she feels she has grown the most and developed the most professionally. It’s been a great first year and she hasn’t looked back. Her advice would be: “You career is like being on a road trip – you can look back and enjoy the view, but you’ve got to keep your eyes on the road ahead”.