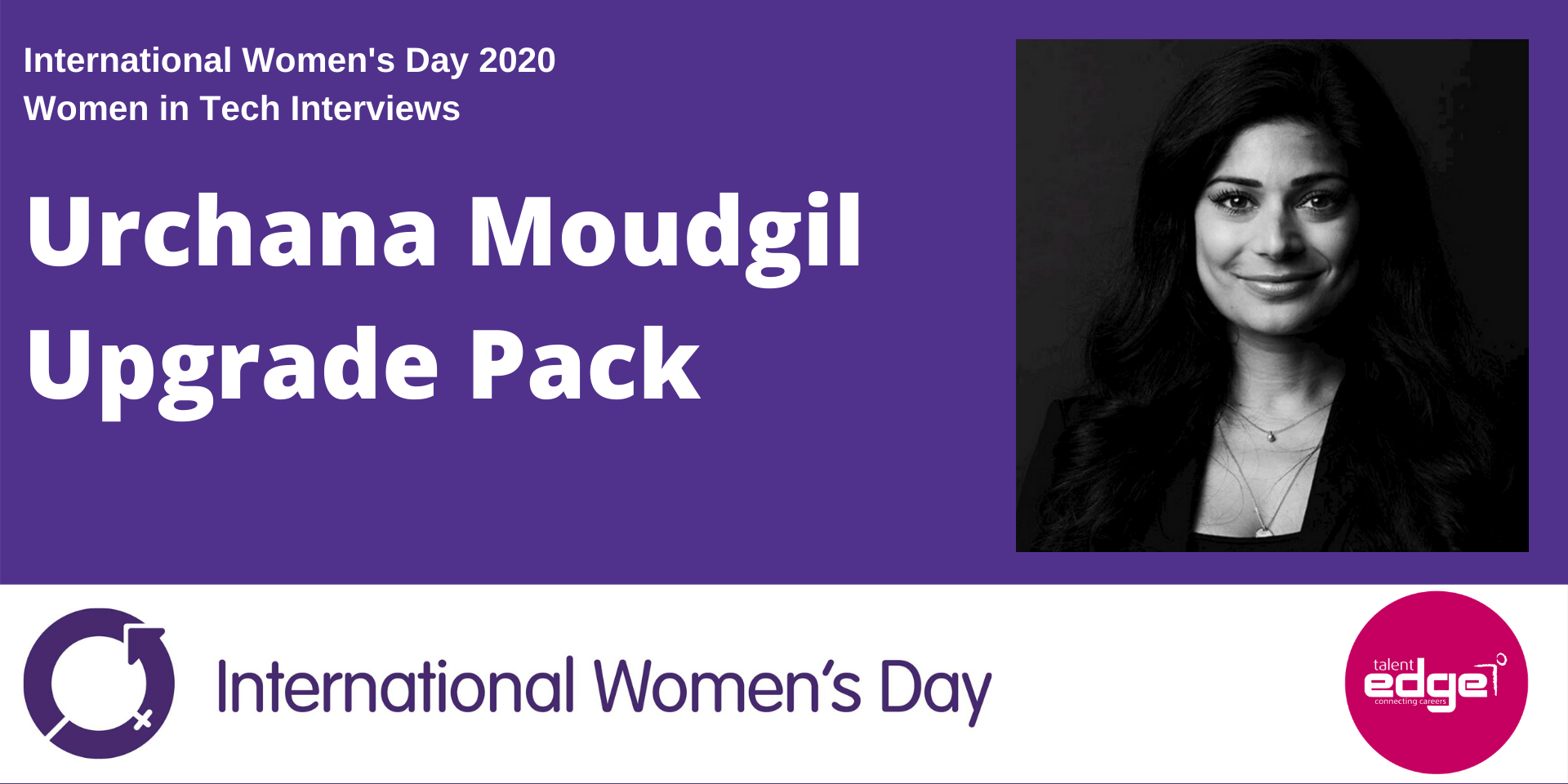 As part of our annual IWD celebrations we sat down with four inspirational and successful women in the Tech space to discuss their thoughts on International Women’s Day, and its impact it has on wider diversity issues as well as the challenges women continue to face within the Tech world. I’d like to thank them for their time and insights.

Urchana Moudgil is Co-Founder and COO at Upgrade Pack, a tech startup that’s transforming the market for flight and hotel upgrades. After years in senior finance roles she’s busy scaling her business having raised £5m in private investment. Urchana is passionate about supporting the next wave of female founders and speaks frequently on fundraising based on her experience.

You have built a Tech company that is 56% female with 20+ nationalities. How has the focus on International Women’s Day contributed to this level of diversity?

I’m exceptionally proud of the team we’ve built at Upgrade Pack. From the outset Craig (my co-founder) and I committed to creating a company with balance at its heart – and a gender balanced team was a key part of that.

We’ve been established for just under two years now and have consistently boasted an above average proportion of female employees, especially for a tech company, which now sits at 59%. When Craig and I set up the business, we were very much aware of International Women’s Day (IWD) and knew it would be an important date for us in terms of amplification and engagement. Last year’s event was our first opportunity to get involved with it as a young, high-growth startup. In 2019 we had various activities during the week to coincide with it including sharing profiles and interviews with the women in our team, advertising career opportunities in alignment with IWD content, and connecting with other likeminded organisations and events that promote female entrepreneurship, women in tech, and STEM more broadly. So, for us, it’s been a great building block from which to build further on our commitment to be a fully inclusive company – across gender, race and culture 24/7, 365 days a year.

In terms of diversity, IWD also enabled us to showcase our culture as well as talk our own narrative around women in tech. We have eight core values that Upgrade Pack was founded on, of which balance and inclusion are just two. Since the start we’ve been active and consistent in articulating the kind of company we are; on our website, through our social channels, in press interviews and ultimately through our people who continue to help shape what our culture should be. This cumulative effect has driven people to us as a place to work. Since IWD last year our female employee base has increased a further 25% and we continue to attract a highly diverse team who frequently cite our culture as a key factor in choosing to work with us alongside the role itself.

What do you think the impact would be on equality if we replaced International Women’s Day with a “Celebration of Diversity” day?

In short, there’s plenty of room for both! IWD has earned its position as the flagship event for celebrating female achievement, but that doesn’t mean it should shy away from the diversity agenda. While gender equality and diversity certainly don’t always need to be mutually exclusive topics, there’s the ongoing need for business and society to galvanise positively around both. The more equality led ‘moments’ that we create to showcase diversity in all its forms, the better for a more understanding world.

Certainly, for me having grown up as a British Indian in Edinburgh and my mum being first-generation Indian, championing diversity is close to my heart. My extended family were a minority and while I know that the acceptance was there, there were moments when it was tough for them. I often think if they were not accepted at that point, what would that have meant for me? So, having come from that cultural background, celebrating diversity remains super important to me and is something that drives me in both my personal and working life.

According to a recent Beauhurst report, the percentage of GBP invested in Female-founded businesses is declining having dropped from 15% in 2015 to 9% in 2019. What does this mean for the future of ambitious women founders and the level of success they can achieve?

I mean, that’s a hugely important topic in its own right. Definitely, when I see research like that I wonder to myself, ‘why is this? – especially when it feels like we’re seeing more and more female entrepreneurs ‘out there’, being profiled and talked about. But then data like this, highlights that there are still so many woman-founders with the potential but without the recognition when it comes to financing. Of course, we must be encouraged by the success stories we do see, but we need to constantly push the envelope to promote more investment in female-founded businesses. This goes beyond money, I want to see more belief, confidence and excitement around female-led businesses, it’s so important.

From my own experience, when Craig and I were raising investment, questions would often be automatically directed towards him – even on aspects relating to financial management and operations as my area of responsibility. But if I let that affect me, I wouldn’t be here today, and it was an important experience in terms of taking the ownership and breaking those habits.

It’s why I’m driven to help aspiring female founders and women in business. Over the last year, I’ve done quite a lot of public speaking about angel investment, as this route can get lost between bootstrapping at one end and VC at the other. So many women have great business ideas but may not be as prepared in other important aspects of the pre-work needed to secure investment; from negotiation and knowing your value to identifying the right angels to approach in the first place. Mastering these prior to pitching can help ambitious women not only get to the next level of success, but also thrive in the process of doing so.

Upgrade Pack is also looking at its own initiative ‘Shaking UP the Tech World’ to support ambitious future female founders, leveraging the expertise we have across leadership and product, marketing, commercial and finance teams – which we will release details of this Spring.

The fact it’s been going strong for over a hundred years shows how relevant it is. From early beginnings to now commanding global focus on female accomplishment, women’s rights and the future enablement of women, it continues to get bigger and better.

I believe this year’s event chimes with the one hundredth anniversary of women getting the vote in America (and 102 years in Britain), demonstrating the significant eras of change that these events preside over.

IWD continues to shine a light on female achievement and empowers us to collectively break down barriers that have held women back. It’s been key in inspiring society, and women themselves, to realise their own worth and potential across all spheres, as well as pushing for important change when it comes to female equality. It is this balance of celebration and campaigning that will continue to make IWD relevant around the world.

This year’s theme #EachforEqual also connects to what we’ve already talked about on diversity. Regardless of gender, age, race, religion or sexual identity, a consistent celebration of a diverse, vibrant and equal world has to be the gold standard for a tolerant and progressive future – from losing the gender pay gap to securing basic civil rights for women in parts of the world.

Thank you Urchana for your contribution to our interview, it was great to discuss IWD with you. I look forward to partnering together in the future.