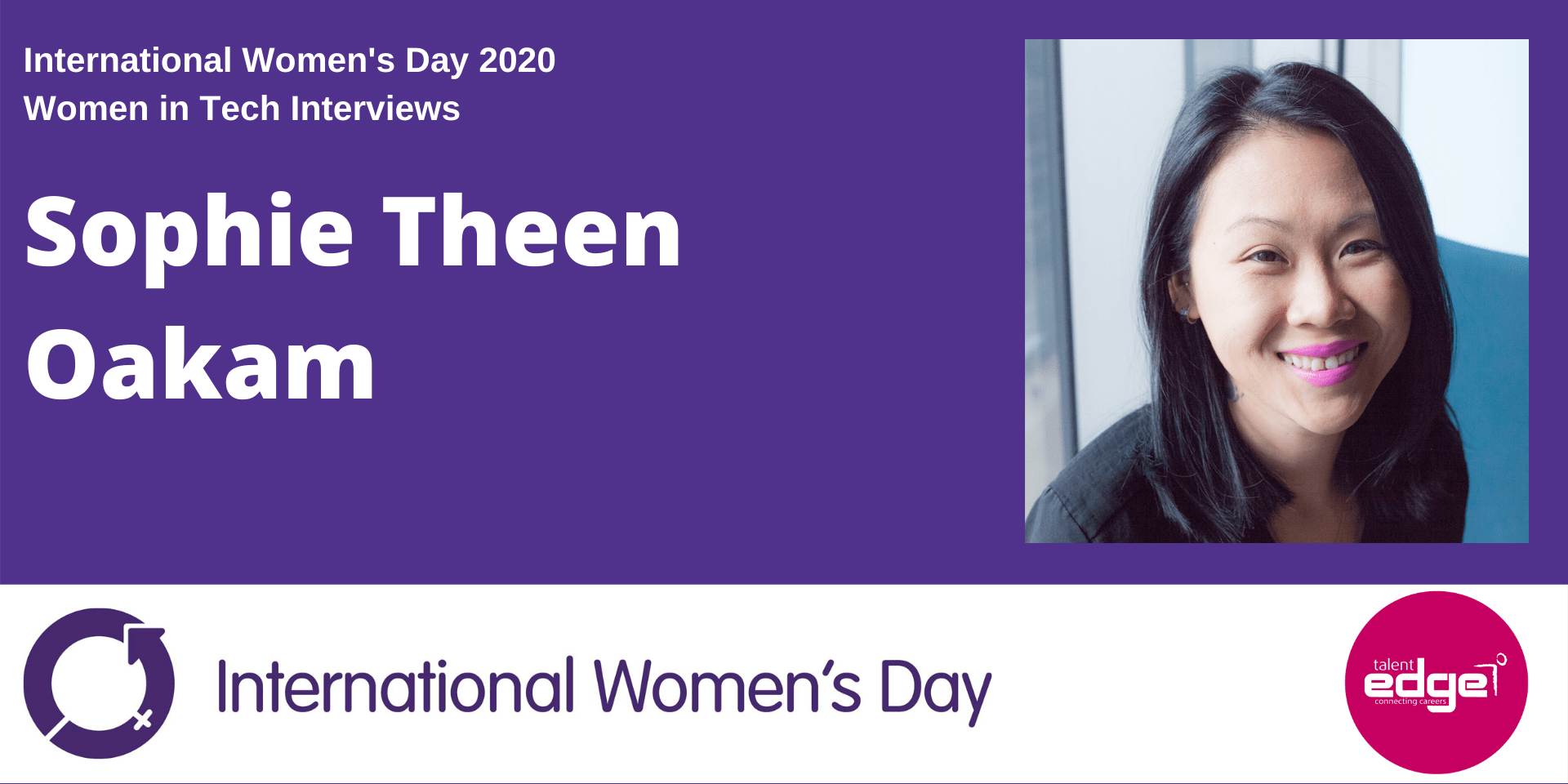 As part of our annual IWD celebrations we sat down with four inspirational and successful women in the Tech space to discuss their thoughts on International Women’s Day, and its impact it has on wider diversity issues as well as the challenges women continue to face within the Tech world. I’d like to thank them for their time and insights.

Sophie Theen as the Chief of People for Oakam aims to shift cultural paradigms within organisations and to champion diversity and equality using structured, disruptive thinking. Before that, she led recruitment projects with Ford, General Motors and IBM, before shifting her passion and focus to setting up the future of HR in Fintech Startups like Pollen, Revolut & 11:FS. She is a regular mentor and career coach in the startup community. A prolific writer on Diversity, Sophie also runs an HR community in Slack, Work Experience Programs for young women and as a People Advisor to new Founders of FinTech startups in London.

How has International Women’s Day affected the wider diversity debate?

International Women’s Day is obviously very important because it creates that kind of awareness (around the wider diversity debate) but for a time a couple of years ago, when I saw more and more companies and people talking about it, I felt like it was a type of propaganda and companies didn’t have real, tangible goals behind it. It was more like “hey, we support women but we don’t know how. We want to get loads of snacks in and just talk about this” (it’s the same thing as what’s happening to Mental Health Day right now) but recently, I think we are definitely seeing things change. There are a lot more activist groups that are making full use of International Women’s Day to talk about harassment at the workplace and how we deal with this. When you think about a woman and what they have to go through at work, sometimes it’s positive and sometimes it’s negative but addresses so many issues in between. It’s not just that physically you’re a woman and you go to work so you get celebrated because it’s International Women’s Day – there’s a lot more effort I see that goes into it.

We’re running something with The Young Women’s trust for International Women’s Day and what I’m super excited about with that particular programme is it’s not about the bake sale we want to do but the talk we’ve organised around mental health specifically for younger women.

So it has definitely, now more than ever, affected the wider diversity issue because the more recognition that we give and the more emphasis on women on this specific day, it makes men more uncomfortable, more often. I see more changes coming about because they will now know that this is not something we talk about once a year but something that happens in the boardroom every single day. So I definitely see the trend changing and I’m a lot more hopeful now because when I first came to the UK, we would talk about it for the sake of talking about it and now I feel like a lot more people actually care about it.

What challenges come with attracting women into technology and how do you get around them?

I think the biggest challenge to attracting more women is that women actually don’t know that there are opportunities out there. So previously people have said there are no opportunities or men create the bottleneck for women that stops them from getting a seat at the table or that women cannot make enough (money) or do not have the salary negotiating. That’s why we have seen campaigns focused on things like “breaking the glass ceiling” but I feel that it’s this kind of mentality that creates the problem for us. We keep thinking that other people block us from having that opportunity and tell ourselves that we will never get there because the reality is that the culture is like that. I think the main issue for women not being able to get into Technology is because we have that sense of doubt and we are not confident enough that we do exactly the same work that men do.

Companies then take advantage of it. It’s like a chicken and the egg situation, if there are fewer women applying for role because they don’t feel confident enough and they doubt themselves then companies don’t see enough applications from women and they have no choice because the work needs to be done and so the emphasis and energy of recruitment campaigns goes back to how it has always been. I feel like we need to take the first step and believe in ourselves and what we can do.

I was recently speaking with Code First Girls who are a huge community of women that are very very willing to go through the 16 week course because they want to switch their career into tech, however, while the community is there, they don’t actually know what Code First Girls can do for them. So it feels like you’re part of a community of women in tech but you actually don’t know how many resources there are available within it.

The real problem with the scarcity of females in technology isn’t at the point where they’re not getting into the business, it’s simply that they don’t know there are opportunities in the business.

Will gender recruitment quotas result in greater equality or will they result in choosing diversity over quality?

I feel that diversity and quality come together as a pair. The more diverse your teams are, the more diverse your mindset is, and the better quality of production will come out in your product;  that way your leadership team builds a better company. I don’t think one compromises the other, however, I think gender recruitment quotas are something that I am firmly against. When you’re small business and you look at a scale of let’s say 100 people in the company and you do set a quota that you want to balance it out to be 30% or even up to 50%, you’re only really talking about hiring another 50 females and so the effort that goes into it is natural and organic because you only need to attract a relatively small number and that’s less detrimental to the whole point of diversity over quality. However, when you are a large organisation with 1,000 people and you’re trying to balance it out by a mere 10% then you’re talking about 500 people and there’s not necessarily 500 women available in the market, that’s when I feel that quota can backfire because the effort and the focus goes into the wrong things and companies are throwing a lot of money at the problem, they’re running large campaigns where they’re only talking about women, women, women or going to schools trying to just attract females and it’s not very inclusive as a whole and so while I think some recognition and awareness can be created by a quota it has to be treated quite seriously because if it’s just a numbers game, eventually you will get people who are either not ready for tech and maybe that’s not the career they want and there is no longevity in it. It can’t be just about the numbers you bring in – it has to be about the quality that you bring in.

100%! I am a female and I couldn’t be happier that I have a full day to celebrate and I get the opportunity to be so proud of who I am. Especially in FinTech – we talk about how there are not enough women in Tech let alone FinTech and it’s the whole conservativeness of the banking world and there are only so many role models. I wish we had more but we take what we can and we are really happy with what we have but to have a whole day of that recognition of being different but also being equally important in this world, I think it’s very very relevant still. It’s even more relevant for younger women because a lot of times they don’t feel they are as successful as men because they don’t have a role model. So having this recognition and celebrating a whole day through things like the article that you are doing, hopefully, younger women get to pick this up and they will know that okay that’s fine it will be my time very soon but at least there is that recognition that I am on the right path and I don’t feel like that just because I’m in a male-dominated environment I would never be recognised or I will never be successful. So I still think it’s very very relevant.

Thank you very much to Sophie. It was great to meet with you and a pleasure to be able to hear your insights into such a relevant and current topic.