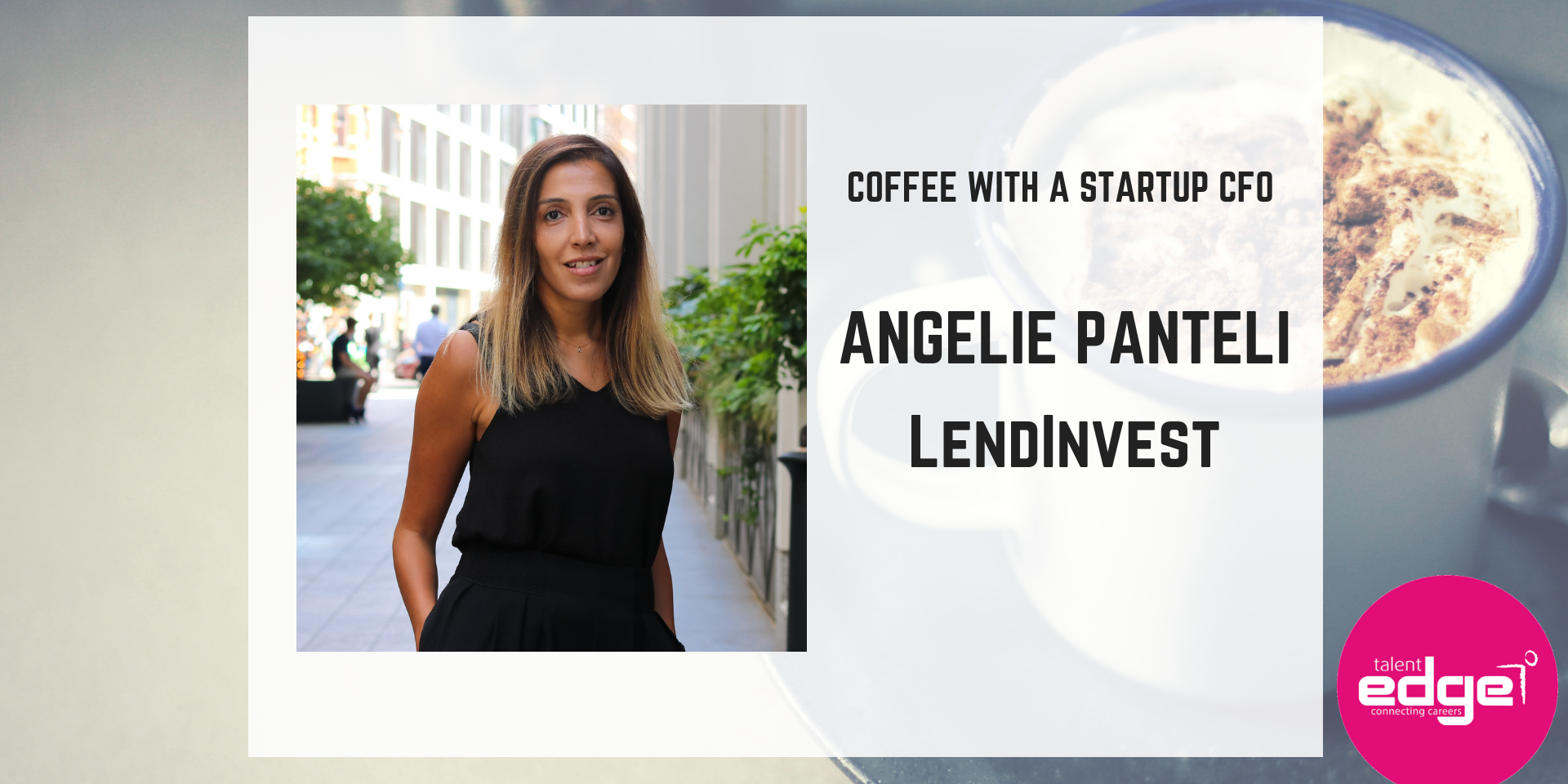 Continuing with our series, I recently grabbed a coffee with Angelie Panteli of LendInvest to discuss being a startup CFO. Let’s hear her thoughts…

What do you make of the current UK start-up market?

The UK start-up market is super exciting right now even with the spectre of Brexit. The opportunities for founders, investors and those working in the start-up space are vast. For example, if you are a graduate looking for your first job in industry, previously you’d have been thinking about a graduate scheme at a well established, blue chip business whereas now, I’d say, the go-to preferred option for graduates and those who are in the early stages of their career, is the start-up space. You can make your mark very early on, and progress a lot quicker in your career than you would in a larger business. It’s great if you’re looking to move into that space but it’s so much harder to recruit as there’s a lot of competition for good people!

If you’re the founder of a business, the volume of inbound investment particularly from the US is huge – over £1bn was invested into UK start-ups by US based VCs during 2017 and I don’t necessarily see that changing. We closed a Series C round this year which was made up of European and US based investors including the Luxembourg Future Fund, advised by the European Investment Fund, who made their first post Brexit investment into LendInvest.

It’s going to be interesting to see what happens next year. My concern is that the UK could lose that competitive edge because good talented people who would ideally have come here for roles in the start-up space, may now head to other tech hubs such as Berlin, Amsterdam or Paris.

Why did you move from corporate to start-up?

I didn’t intend to if I’m being totally honest, it almost happened by accident. I qualified as an ACA at an audit firm, and then immediately moved into industry as is the traditional route for qualified accountants who don’t want to remain in practice. I was the Head of Tax at Eurostar at the time when I was approached about a role at Wonga which was in its early stages. My initial reaction was uncertainty about the business given its reputation. What I discovered however, was a business that was in hyper-growth mode, where I met some of the smartest people I have had the privilege of working with, where decisions were made quickly and executed upon and where we worked together as a team to grow the business as quickly as it did. I realised this was the perfect environment for me as I’m someone who likes to make an impact. Being able to go in and not have to deal with multiple layers of people and bureaucracy was very attractive to me. You’ve got to be a certain type of person to work in an unstructured start-up where it’s very autonomous and you own the decisions you take from day one.

What advice would you give to people looking to make the jump into a start-up?

My advice would be to understand the type of role that you want to do and really think about the types of business where this would be a good fit. Most start-ups don’t have the money for a large finance team, at least not early on, so they are looking for an all-rounder, someone who can manage the finances, keep an eye on the cash runway (which is the most important thing early on), do the forecasting and fundraising and make sure people get paid! No one day is ever the same! You need to be able to pick things up, even if they don’t sit within your role, and get them done.

If you feel you can do this, reach out to businesses directly and put yourself forward – even if there isn’t a role for you at that stage, if they like you, they’ll almost certainly contact you when they have more money and the ability to hire you.

Be cognisant of the fact that start-up salaries and packages are not on par with bigger businesses. You are joining a start-up for the longer-term opportunity, so you need to give this some serious consideration if moving from a more established business with a structured compensation package.

How do you view the role of a start-up CFO currently? And in the future?

It depends on the stage that the company is at. If the company is a Series A start-up and you’re going in as an early stage FD, your job is to ensure that the company has got enough money to get as far as it can before the next fundraise. That’s the number one objective! It’s ensuring that you have a tight handle on costs, hiring, and all spend that could impact the cash runway. If you’re going into a much later stage company, for example where I am now at LendInvest, (Series C, well-funded, profitable), you’re at a very different stage and your job then is to ensure that the business is set up for longer term success and the financials are there to support the overall business objectives and strategy. You are there to ensure you have a team and a function that is scalable with the appropriate skills, systems, processes and controls.

Whichever stage the company is at, you’ve got to be working hand in hand with the founders as they need to trust you and know that you are looking after the finances so they can concentrate on building a fast growing business.

You need to be someone who can engage with the rest of the business outside of finance. This is key. There’s no point going into a start-up as an FD or CFO and being reactive where nobody involves you in decision making, because at that stage, everything is out of your hands and you’re not in control of how the business is spending its hard-earned cash. You need to be able to get buy-in very early on so that you are involved in any decisions that impact the finances of the company.

You also need to be versatile and happy to roll your sleeves up. Even now, I have no problems producing stat accounts or VAT returns!

What’s the best part about your role?

I love my job! In a start-up environment, you’re normally working in a business where hopefully you’re growing fast; launching new products, moving into new markets or geographies and there should be a lot of variety in your role – there certainly is in mine. As a result, you’ve got to be very dynamic and able to think on your feet and make decisions quickly. If you’re in the right business, you should be making a massive difference and having an impact from day one. This is the most rewarding part of my role.

Can you tell me about a time in your start-up career where you learnt the hard way, even though it was a great learning experience?

I learnt the hard way in that, where you’re a CFO and responsible for the finances, you need to really put your foot down early on. You need to be brave enough to paint the full picture, as you need to extend the runway as long as you possibly can, one way or another. Most things aside, for any early stage start-up, running out of cash is the nail in the coffin and it’s that, that will put you out of business.

How crucial is it for you to have a great team around you, both finance & SLT?

Absolutely essential! When you work in a support function such as finance or legal, and you’re not directly generating revenue, it’s very easy to be left in the background with others not involving you and as a result you become very reactive. Having the ability to engage and get buy-in early on so you are involved in key decisions from the outset, is essential. Your team need to be able to do this as well as you. With our exec team, we all work hand in hand together as we are there to deliver the business strategy as set out by the founders and our investors.

I’m very lucky in that I now have a fantastic, high performing finance team. Since I joined LendInvest in January 2018, I have spent the last eleven months building out that scalable team with the right skill, attitude, cultural fit and experience. Most start-ups unfortunately find themselves in situations where they don’t necessarily have the ability to invest in good systems and hire good people at the same time. If you’re not investing in good systems and you’re not investing in good people, you are not building out a scalable function that can support the business as it grows.

What is it that you look for when hiring a #2 & subsequent team?

I look for people who are dynamic, can think on their feet and outside of the box. As a number two,  they need to be good managers who can motivate and inspire their team, bringing out the best in them. That is really important. In terms of the wider team, we hire people who may have no experience in tech or the start-up world, but their attitude is key. If they have a go-getting attitude and are not afraid of hard work, they fit the bill.

If you were to recommend a work related book, what would it be and why?

If you want to read something funny, there’s a book I love called Disrupted by Dan Lyons. If you’ve watched the show Silicon Valley, you’ll get this book. It’s a hilarious insight into the world of these massively well-funded tech companies in the Bay area.

On a very different note, The 30 Day MBA by Colin Barrow is a great read for anyone wanting a well rounded view on the various aspects of a fast growing start-up, from product, to tech, to marketing to valuations. It’s a good one to dip in and out of, even after you’ve read it from cover to cover.

Angelie is a chartered accountant and chartered tax adviser and has extensive experience in roles across both large global listed businesses and more recently, fast growth technology businesses. Prior to joining LendInvest (www.lendinvest.com), Angelie was at Blippar, the world leading augmented reality technology company.

Scaling Tech Question 3: What are your top tips for business tools ?
October 1, 2019
Follow us