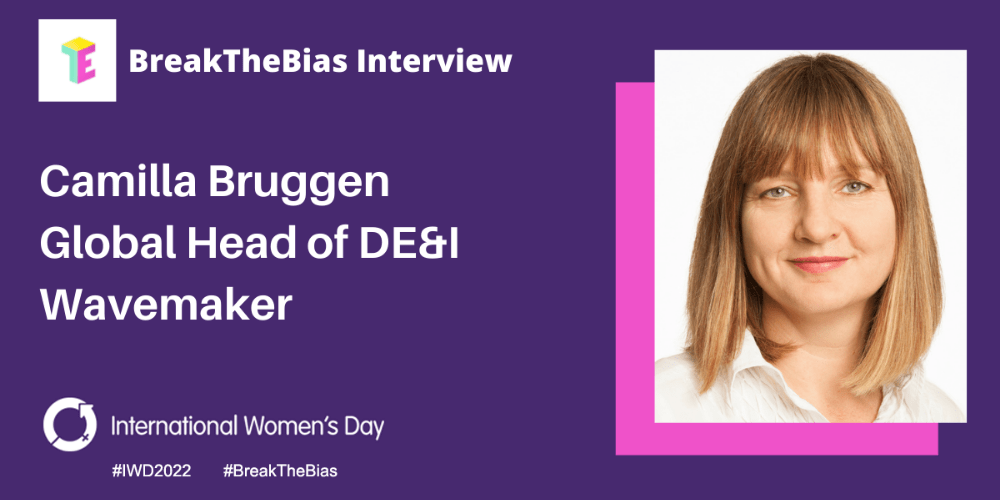 Camilla Bruggen has over 20 year’s experience working in media and marketing services. As Head of Data Insight she has helped blue chip clients such as Tiffany & Co. and Xerox create impactful strategies to drive growth. Now in her role as Global Head of Diversity Equity & Inclusion, she is combining this experience and expertise with her belief in the importance of creating a diverse, inclusive and equitable culture to help drive Wavemaker’s global DE&I strategy.

What does #breakthebias mean to you in regards to your role and responsibilities as Head of Global Diversity, Equity and Inclusion?

There’s plenty of evidence that talent is equally distributed but opportunity is not. Breaking the bias is about equal opportunity, not just to succeed but for everyone to feel that they belong and are included in the organization, that they have just as much of right to be at the table as anybody else, and just as much right to be heard.

For example, when we are talking about gender bias, it’s been found that competency tends to be associated with men more than women. Even when you do things such as the female shortlists and mix gender interview panels, people (both men and women) can still have that bias. So you can have great women on the shortlist but when it gets to the crunch point, it’s still men who are associated with competency.

There’s so much bias against women whatever age they are – young women may not be taken seriously enough or not being given the opportunities, as well as older women becoming invisible and overlooked and being seen as past it in a way that men would be seen as having authority.

“Breaking the biases” is a long-term project.

Wavemaker talk about fostering an attitude of “Positive Provocation” across the business which is a really bold, strong concept – can you describe what that means and how you encourage it in relation to DEI?

Positive provocation is a great positioning to have as an organization because it gives your employees permission to step up and not just accept the status quo but be given the opportunity to challenge it in a positive way. It’s supported by some great work we’re just beginning to roll out around DE&I and bias which is underlying it.

We have a mission statement which is “Wavemaker embraces, all kinds of difference, different voices, the other angle, the counterpoint. Together with bring positively provocative – that’s how we grow”.

What’s great about that is the acknowledgment that we need to have diverse voices in the room and again, there’s evidence that diverse groups of people are more effective and better at problem solving.

Sometimes it can be slightly more uncomfortable and can lead to uncomfortable conversations but those need to be embraced and while people may feel more comfortable with people like them it’s really interesting to be exposed to different people and that’s when you change your mind and change your behaviour and look at things from different angles.

We’ve now got a very gender balanced and diverse executive board and one where there’s encouragement to have different points of view and there are different personalities.

Wavemaker supports positive provocation through a bottom-up and a top -down approach. We are extending and supporting our network of employee representative groups (Diversity Groups) and our local DE&I champions and they’re now connected closely across Wavemaker as well as with GroupM and WPP. It’s about giving those groups the opportunity and visibility to promote DE&I, and positively provoke our leaders and our employees. Each one of the groups has got an executive sponsor who they meet with on a quarterly basis and the executive sponsor has got responsibilities and targets that they have to deliver against. The executive committee have all made pledges to DE&I, which are tracked every quarter to see how well they’re doing.

It’s very much about the leadership team together with the Diversity Groups pushing up and spreading the word and working together to positively influence employees, and to see what diversity and inclusion can look like across the globe.

Gender bias in organisations often intersects with other biases such as race or age – can you give us some examples of what WPP and Wavemaker are doing to address this intersectional bias?

WPP is an anti-racist organization. They’ve pledged $30 million over three years to anti-racism causes, and there’s racial equity programme funding for different groups. There’s also a very clear code of conduct and training and it’s everybody’s responsibility to do that training. This year, Wavemaker with WPP’s support, is rolling out our Respect at Work programme to all our employees.

WPP have also collected a lot of data on DE&I around representation across all seniority levels, for gender and ethnicity including pay gap and employee sentiment data. The group that consistently come back as being the most under-served group are black women in the US and UK. People from the black community have long been aware of this bias, we now we have the WPP data to reflect this. Consequently, WPP have developed a programme to tackle it – The Elevate programme – which has been launched in the U.S.

The Elevate programme is a one year sponsorship and training programme focused on mid-level black women. It’s been really successful in the U.S with amazing feedback from the delegates and there are really good rates of both retention and promotion amongst that cohort. It also builds a network of those women to get a critical mass. It’s been so successful that it’s now being rolled out in the UK.

In regards to the intersectionality of gender and age bias, I think about my own career and all of the amazing women who I started with, who I’ve come through the agency with – Where did they go? Why are they not getting the opportunity to reach the top? Or to succeeded in whatever way they want to.

One example of the ways Wavemaker is looking to address the issue of lack of opportunities for ‘mid-life’ women is the Visible Start Programme which is backed by WPP and focused on women aged 45+ from diverse backgrounds who are either returning to the workplace after having a career break, looking for a first career or moving industry. We’ve built this in partnership with Brixton Finishing school and the Uninvisability Project and it address areas of the media where there is significant underrepresentation of midlife women, particularly digital media.

It’s a two month learning programme and it has short, medium and long term objectives which include: targeting the shortage of diverse talent in the industry; upskilling women so they are financially independent and successful; providing access to opportunities within the media including GroupM agencies and introducing senior women from adjacent industries into a fast progressing career route.  This is about creating a new narrative for midlife women and changing industry perception.

While businesses like Wavemaker have been working to overcome hiring bias and increase diversity for some time, others will just be beginning the journey. Where do they start?

Apply the same strategic thought and budget that you would to other problems.

What is the problem you are trying to solve? and what can you solve – you know, you can’t boil the ocean! – so what are the things that are in your control? Then look at what data you have around the problem and then come up with a strategy that you know is effectively going to change behaviors. Then measure it – because what gets measured gets done.

You need to have KPIs and people need to be accountable and it absolutely needs to be owned by the leadership team, the buck has got to stop with them. There’s no point in a few employees running events that are only attended just by people like them. It’s got to be led by the executive.

If the issue is diverse talent then it’s about widening the net and looking at where you get people, how you attract staff and looking at what staff want. And I would say bring in the experts in this field, for example we work with Brixton Finishing School and Creative Equals and these are people who know their stuff.

And accept that it’s going to take work and it’s not just going to happen organically, it needs budget!